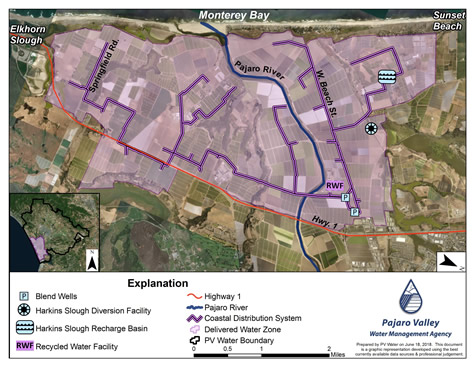 The Coastal Distribution System (CDS) is the conveyance pipeline for PV Water’s supplemental water supply, which is composed of a blend of recycled water, Harkins Slough Recovery Well Water, and inland groundwater. The CDS consists of over 21 miles of pipeline capable of providing supplemental water to over 5,500 acres of agricultural land at a guaranteed pressure of 80 PSI.

Construction is beginning on Monday, May 18th for PV Water’s Coastal Distribution System F-Pipeline Expansion Project.  The project will expand PV Water’s delivered water service area to include farmland west of San Andreas Rd that is being impacted by long-term groundwater overdraft and resulting seawater intrusion.  After completion this fall, 700 acres of irrigated land will have access to delivered water.

PV Water was awarded over $3,400,000 in Proposition 84 “Drought Emergency” grant funds from the CA Department of Water Resources (DWR) to construct this important project. These grant funds made this pipeline project possible by covering the majority of the construction cost for this project.

The pipeline expansion, named the F-Line Project, will add 9,900 linear feet of distribution pipeline, along with valves and turnouts. The F-pipeline expansion supports the continued implementation of the stakeholder-driven Basin Management Plan and the ultimate goal of stopping groundwater overdraft, seawater intrusion, supporting our agricultural economy and reaching groundwater sustainability. The Pajaro Valley Groundwater Basin has been determined by Department of Water Resources to be a high priority, critically overdrafted basin. 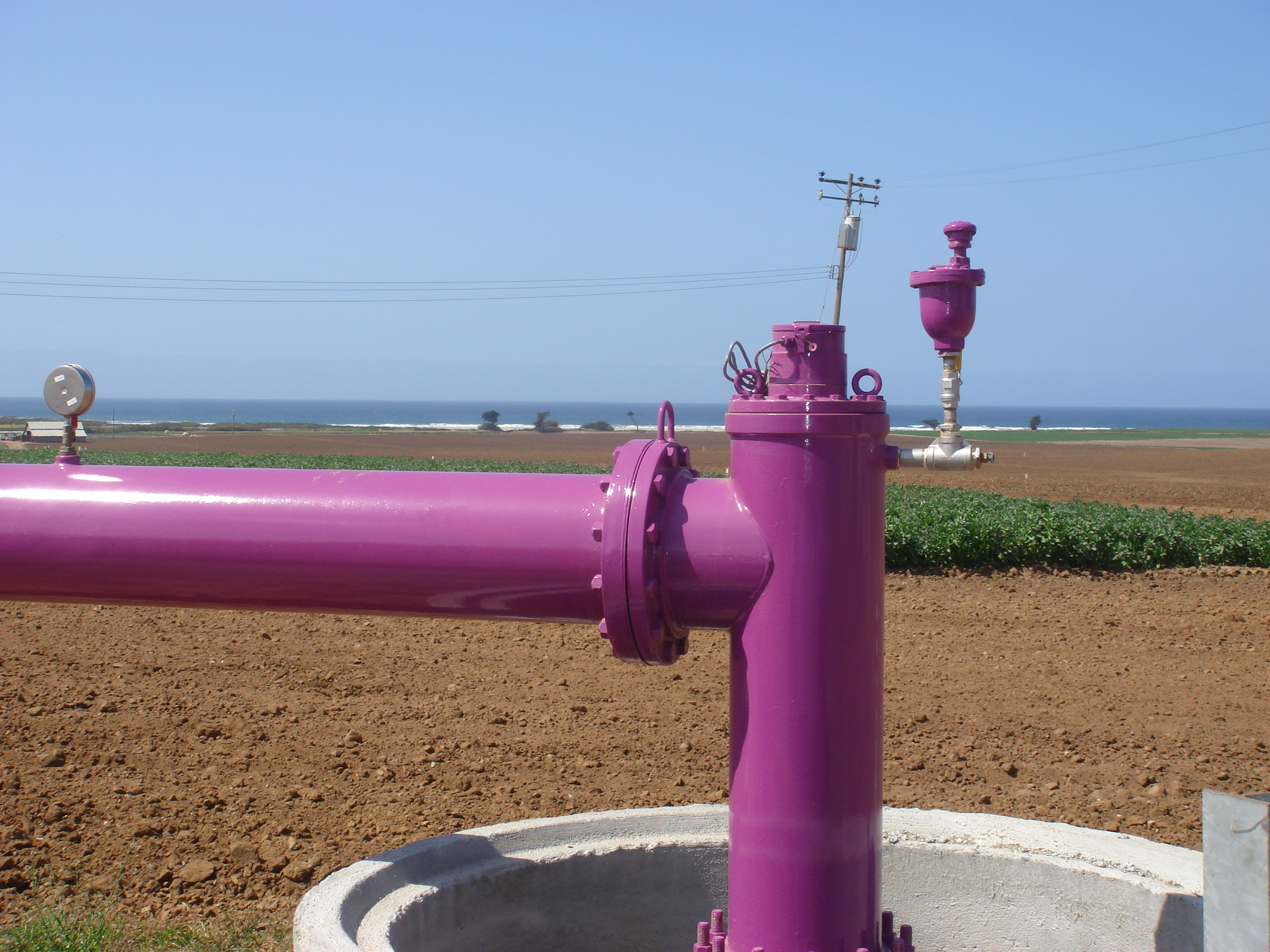 An example of what a turnout will look like after F-Line completion. This turnout supplies delivered water to farmers affected by seawater intrusion in Monterey County.

Complete buildout of the Project consists of approximately 15,140 feet (~2.9 miles) of high-density polyethylene(HDPE) pipe ranging from 10 to 30 inches in diameter, approximately 35 feet of 24-inch steel pipe, 15 agricultural turnouts, and piping appurtenances (such as air valves, blow offs, and isolation valves).  The entire Project will serve up to 1,300 acres of farmland in the coastal area impacted by seawater intrusion.

The portion of the Project proposed for construction at this time includes approximately 9,900 linear feet of HDPE distribution pipeline ranging from 10 inches to 30 inches in diameter, approximately 35 linear feet of 24 inch diameter steel pipe, pipeline appurtenances, and 6 agricultural turnouts to provide up to 1,400 acre-feet-per-year of supplemental water to 700 acres in addition to the current 5,100-acre service area.

Construction began in May 2020 and anticipated completion is fall 2020.

The first section of pipeline is currently prioritized because of the immediate need from farmers because of degrading water quality and availability of grant funding to construct the pipeline. The farmland along San Andreas Rd is currently impacted by seawater intrusion, and this extension of pipeline will support farmers by giving an alternative to groundwater and will increase protection of the Pajaro Valley groundwater basin by slowing the spread of seawater intrusion. Farms that have received delivered water since 2002 have shown quantifiable improvements in stopping seawater intrusion and improving water quality, as analyzed by Stanford researchers in 2017.

Approximately $3.4 million in grant funds will be used for the design and construction of the F-Pipeline Project, coming from a $3.0 million transfer from a no longer occurring Integrated Regional Water Management (IRWM) grant and the balance remaining from the original PV Water IRWM grant allocation. PV Water must meet a funding match requirement of approximately $1.0 million.