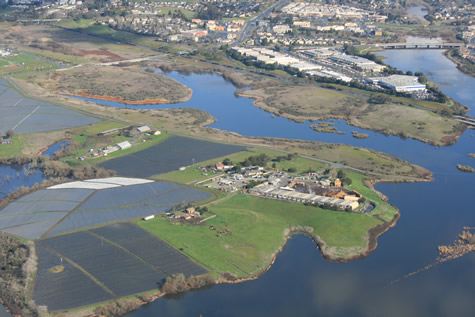 The projects approach and design are similar to the Harkins Slough Facilities, including diversion, filtration, and recharge facilities. This proposed projects would divert water during times of high flows, approximately November through May. The water would be stored in the shallow aquifer located on the San Andreas Terrace and then recovered as needed through a series of extraction wells and used as an alternative to groundwater for agricultural irrigation to help stop seawater intrusion and balance our overdrafted groundwater basin. 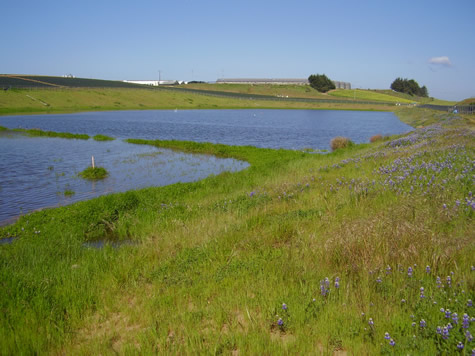 Harkins Slough Recharge Basin actively
recharging diverted Slough waterThe Harkins Slough Managed Aquifer Recharge and Recovery Facility commenced operations in 2002. The Facility allows PV Water to divert, filter, store, and reuse water from Harkins Slough that would otherwise flow to the Monterey Bay. A water-rights permit issued by the State Water Resources Control Board provides PV Water the authority to divert up to 2,000-acre feet per year from the slough between the months of November and May. The water is filtered and pumped to the Harkins Slough Recharge Basin where it infiltrates into a shallow aquifer for short-term storage. Extraction wells located around the recharge basin recover water and supply to the Coastal Distribution System during irrigation demand. Since 2002, PV Water has recharged over 8,700 acre-feet of water as a result of this facility.

Proposed project improvements include optimizing the extraction of recharged water, pump station upgrades at the point of diversion, upgrades to the sand filters to improve recharge percolation rates, and construction of an additional recharge basin.